When Overthinking Blocks You!

Have you ever got stuck in a spiral of stubbornness and inaction? It happened to me just the other day, and I want to share with you the key takeaway I got out of this. It’s a simple as asking yourself two very important questions.
Curious? Keep reading or press play.

Hello, hello, hello. So today I have a bit of a different video because I wanted to tell you what happened in the last few days. I’ve worked on a new lead magnet and I wanted to challenge myself. So instead of creating a pdf, an e-book, I wanted to create a video training. So I had prepared all the slides, my brand was being super consistent and I had prepared everything for the screen sharing.   I had everything ready, so I recorded all the bits and pieces and I when I went through it, after I had imported into YouTube, I realised the quality was too low. So I went back again to the video editing software and I set a higher resolution, adapt the clips one by one.

Actually, it was even worse. And so all around the video, there were four huge black bars on every side. So the size of the actual video was the same and the quality was a bit higher. But because of those, four lateral bars, the slides were hardly readable.
Right. So I got really upset. I got really frustrated because I felt really bad. I have honestly felt really bad because I was like, what the fuck, you know, I challenged myself, I never did a video training and I really wanted to do this and I had prepared everything and now I’m getting a lot of stupid obstacles and it’s like, why?? You know, I want to fix it. I want to get this done.
So I was really frustrated but obviously at midnight really there wasn’t anything I could do because the easiest thing would have been to record everything all over again all together. So obviously at that time, I couldn’t really do it.

The next day I took some distance from it. The next day I didn’t work at all on, on the freebe and I did some client work.
Then I went for a walk outside, did some sports, and when I when I came back home in the afternoon I, I gave a bit of thought about it and then realized that I was just being really stubborn.
So I realized that it wasn’t worth all my time and efforts. What I mean is a good lead magnet is valuable, whether it’s a pdf or if it’s a video training. I mean the quality is the same.
If I put the same amount of effort I put in researching and mastering the topic, the content and the lead magnet is equally valuable.
Doesn’t matter if it’s a video training or a pdf, and this is interesting, obviously I had the script for the video so I have some notes, um, that I had written down while I was recording the presentation and I could have simply turned that into a pdf and tweak a bit that added more details that would have taken really what? 45 minutes.

But I was, I had been really a lot into this mix of a frustration and stubbornness because I wanted to challenge myself.
I wanted to do something different, but then I realized that it wasn’t really worth it. Right?
So what I learned from, from this, and I really want to share this with you because it’s quite easy to end up in this spiral of stubbornness if that when we’re having a hard time with the project or with work or with something, and we get to the point that the frustration is just going up and there is no way back and you keep feeling really bad.
I learned to ask myself, OK, is what I’m doing, is what I’m working on worth a lot of my time? Is it worth a lot of my efforts? Or am I just stubborn because I just want to do it like this?

And number two, is there an easier alternative? I mean, think about it. I had the script of the video and when I figured that there were these problems with the, you know, all this quality and resolution and weird black bars, I could have just said, OK, it doesn’t matter.
I have this script, I can turn this into a pdf and then, later on, I can work on the video and maybe have a video training instead of a pdf. But for now, let’s just do it and sort with a pdf. I mean after all that is better than perfect.
And in this case, I was being too stubborn on the perfection side.
So yeah, I just wanted to share this with you because it’s really easy to do end up in this spiral of stubbornness and it’s just not useful. It doesn’t serve you.
So next time you end up in this, you know, that is something that, that is troubling or frustrating, you, whatever just ask yourself, Is it worth my time and effort? and Is there an easier alternative?

Alessia is a Tech Expert and rescues online coaches from tech disasters so they can easily grow, scale and automate their businesses.
Get my monthly Tech Made Easy tutorials and get immediate access to my juicy 3 No-Brainer Automations for a Thriving 6 Figures Business guide where I’m going to share with you the three most useful automations to streamline
and optimize your online business.
Click here! 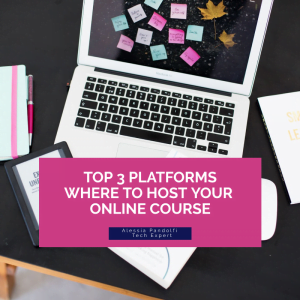 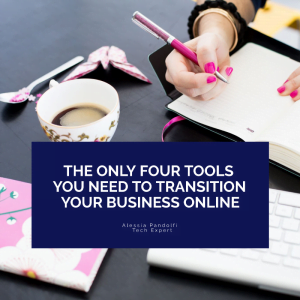 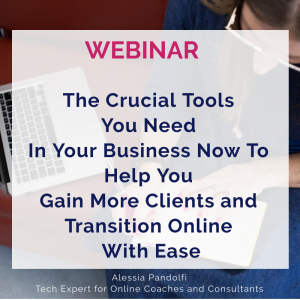